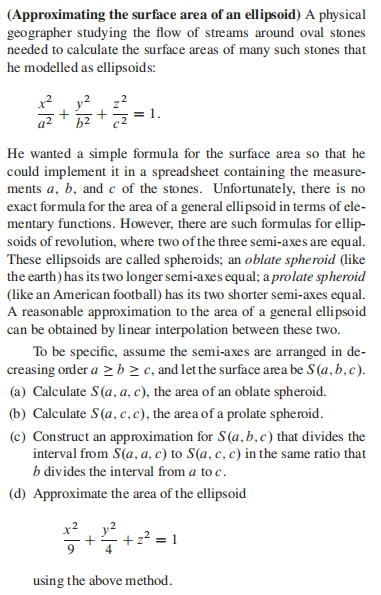 (Approximating the surface area of an ellipsoid) A physical geographer studying the flow of streams around oval stones needed to calculate the surface areas of many such stones that he modelled as ellipsoids: \(\frac { x ^ { 2 } } { a ^ { 2 } } + \frac { y ^ { 2 } } { b ^ { 2 } } + \frac { z ^ { 2 } } { c ^ { 2 } } = 1\) . He wanted a simple formula for the surface area so that he could implement it in a spreadsheet containing the measure- ments \(a , b\) , and \(c\) of the stones. Unfortunately, there is no exact formula for the area of a general ellipsoid in terms of ele- mentary functions. However, there are such formulas for ellip- soids of revolution, where two of the three semi-axes are equal. These ellipsoids are called spheroids; an oblate spheroid (like the earth) has its two longer semi-axes equal; a prolate spheroid (like an American football) has its two shorter semi-axes equal. A reasonable approximation to the area of a general ellipsoid can be obtained by linear interpolation between these two. To be specific, assume the semi-axes are arranged in de- creasing order \(a \geq b \geq c\) , and let the surface area be \(S ( a , b , c\) ).

Chris is going to rent a truck for one day. There are two companies he can choose from, and they have the following prices.

For what mileages will Company A charge no more than Company B?

Write your answer as an inequality, using \( m \) for the number of miles driven.

For what amounts of monthly phone use will Plan A cost less than Plan B?

Fill in the blanks with the appropriate numbers.

Billy rides his bicycle on a straight race track. When he starts sprinting he increases \(2 m / s\) for every second, \(s\) , he continues to drive over \(9\) seconds in the race. At \(9\) seconds he is traveling \(10 m / s\) . He Writes the following functions to represent his speed after s seconds but he must combine them somehow:

Solve the system you have written above.